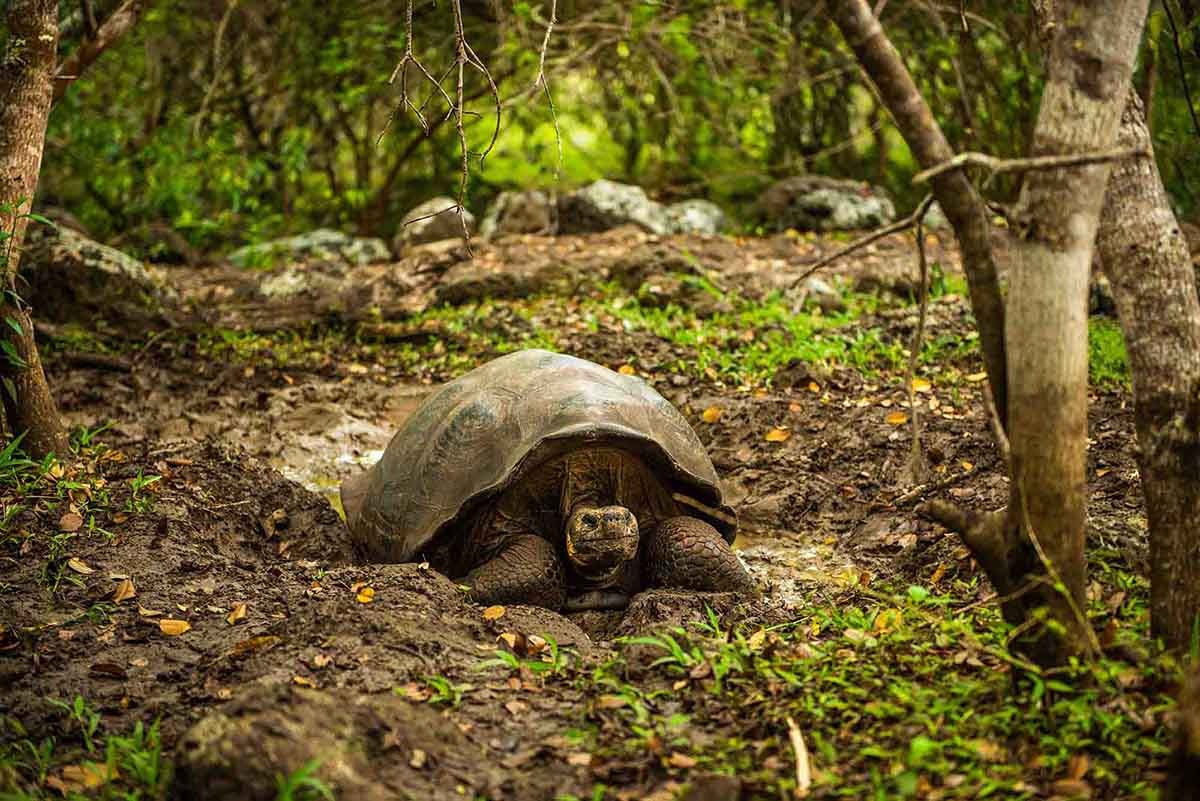 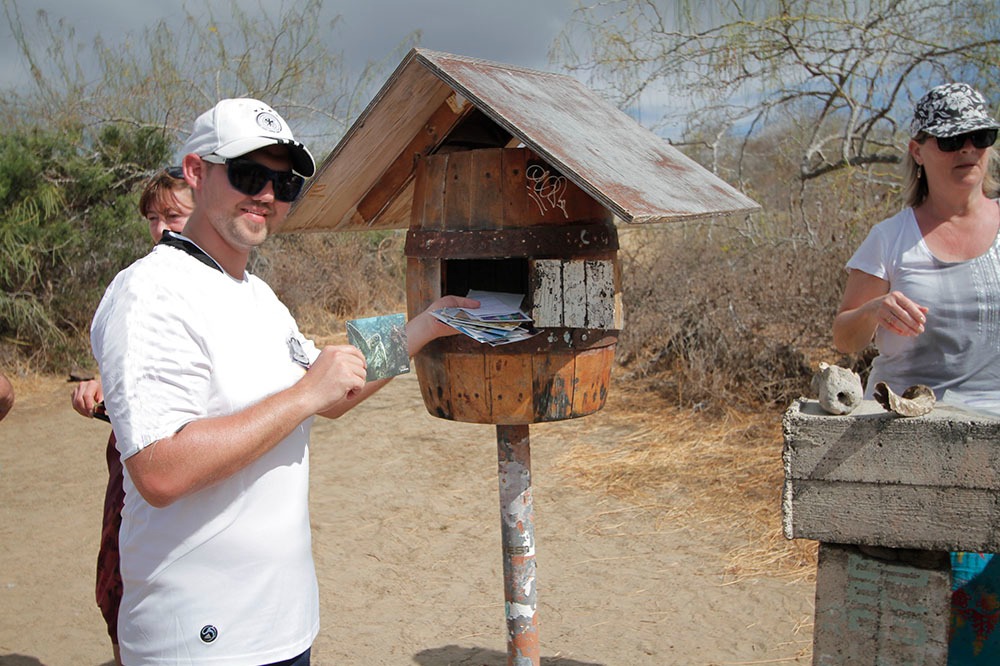 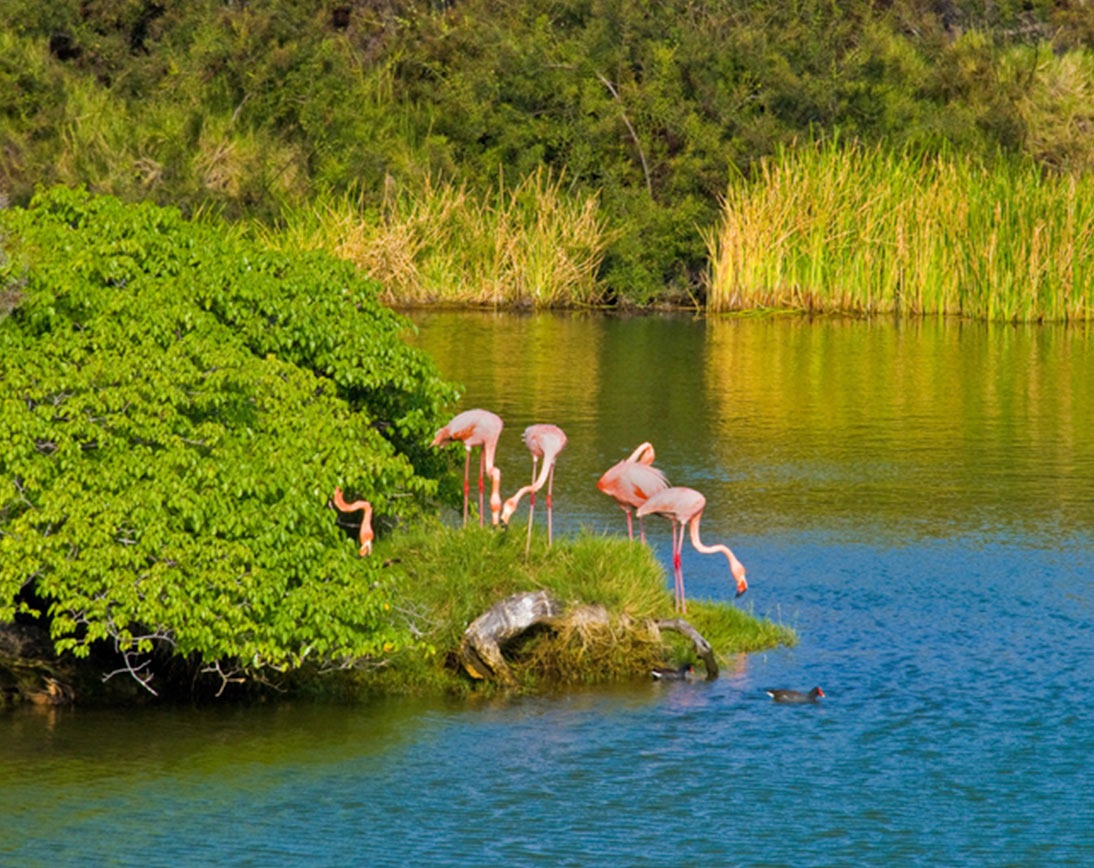 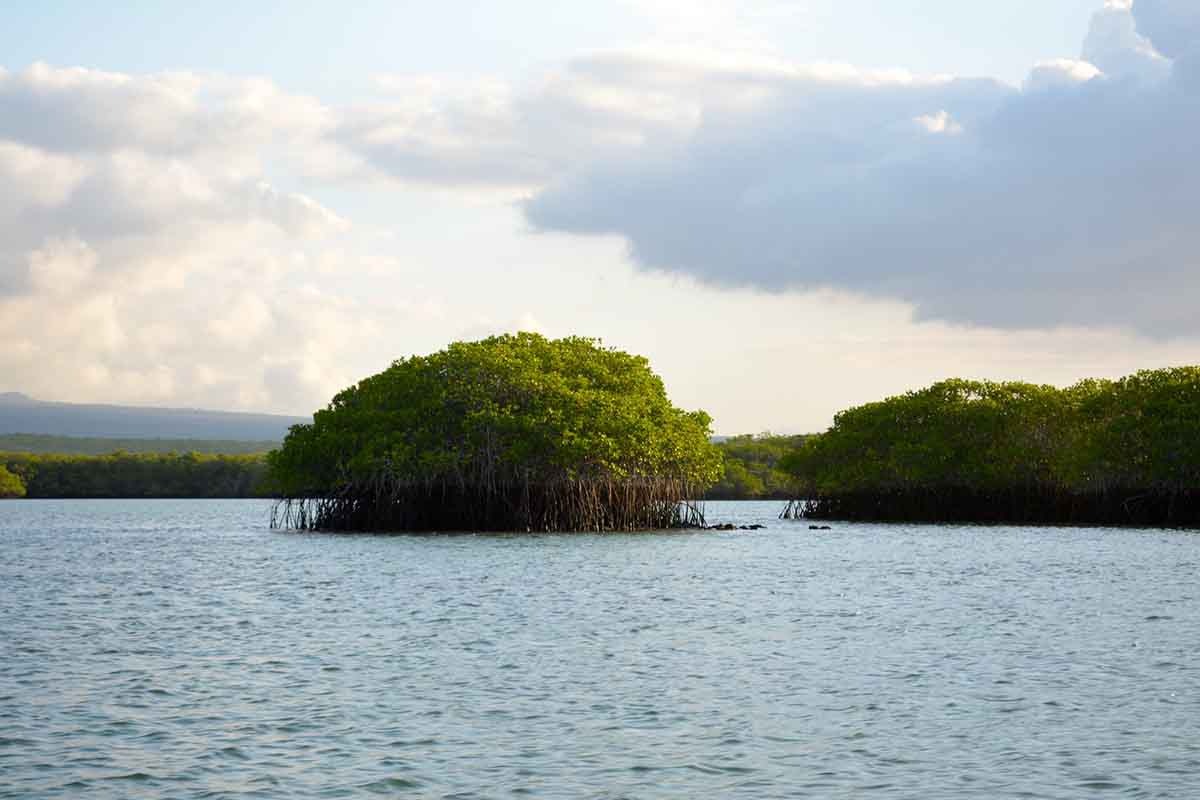 Morning: Arrival to the airport in Baltra, reception by the cruise guide and transfer to the yacht.

*The main visit in Puerto Ayora is to Charles Darwin Station. An excellent way to begin learning about the islands, their origin and formation. You will learn about how the Galapagos turtles are raised and meet Jorge, the famous solitary turtle. The Scientific Station has its own beach that receives many visitors on weekends.

*The visit to Cormorant Point offers two contrasting beaches. Arriving on shore you will encounter a green sand beach (the green sand is caused by the olivine crystals derived silicates or magnesium and iron). From here you will follow the trail leading to a lagoon where Pink Flamingoes and other shore birds can be seen in the distance making their home. If you look closely at the mud of this lagoon, there appears to be 'cracks' in the mud. These cracks are not caused from dryness but are actual flamingo footpaths. This is also a good spot for seeing Large‐Billed Flycatchers, Small‐Ground Finches, Medium‐Ground Finches or Cactus Finches. The walk continues to another beach on the other side made of fine white sand particles known as "Flour Beach". In the waters Ghost Crabs and Rays can be seen swimming. Time and weather permitting you may even go for a swim or a snorkel. Other activities include a panga ride to Champion Point and kayaking at Baroness Viewpoint.

*In 1793 British whalers established the Post Office Barrel to send letters to and from England. This tradition has continued over the years, and even today visitors may drop off and pick up letters, without stamps, to be carried to far destinations. This is one of the few visitor sites that is visited for its human history. Whaling Captain James Colnett established the wooden post barrel in the early 1793. At the time whaling was a big industry, ships were typically gone for 2 years at a time. The Galapagos Islands were a frequent stop for these ships. Outbound ships would drop off letters after rounding the cape and the ships returning home would mail them. Over the years thousands of ships have stopped to send and receive mail at Post Office Bay. Many have posted a sign of driftwood or other materials memorializing their visit. This is the only area in the Galapagos were graffiti is still acceptable.

**Arriving at Post Office Bay you will land on a brown sand beach, passing the sea lions lying in the sun. At the post barrel the guide will pull a handful of letters for the group. Continuing the tradition, the letters are brought home with the traveler and then mailed to the addressee. Visitors also have the opportunity to send letters of their own. There are also the remains of a Norwegian Fishing Village a commercial fishing operation established in 1926 and abandoned a couple of years later. The group of Norwegians arrived with dreams of riches started a fishing and canning operation on $900 each. The tough Galapagos life and a few misfortunes had them abandon their dreams.

Time and weather permitting you may have the opportunity to snorkel again from the beach.

* Visit to Chinese Hat, a tiny island just off the southeast tip of Santiago. Its name describes the island's shape. Those visitors who travel to the island will find its special landscape worth the visit. Though centrally located it is one of the least visited sites in the area. National Park Service restrictions have limited the number of visitors to Chinese Hat. Multi‐day cruises with 14 passengers or less are the only ones permitted at this site. The landing is on a beautiful crescent‐shaped white sand beach, home to Sea Lions and Sally Lightfoot Crabs. The trail on Sombrero Chino's explores its volcanic origin, one of the most evident in the islands.

The lava rock is very fragile and tends to break off when people walk over it. The sharp outcroppings caused from these breaks make it necessary to wear good walking shoes. Patches of Pahoehoe Lava, cracked lava and lava tubes can be found on the island. While the path does not lead up the striking red rust sides of the Chinese Hat to the caldera, it does venture high enough on the island to offer some spectacular views of the waves crashing below. Snorkeling in the waters near Chinese Hat can create a stir; white‐tipped sharks frequent the area, as do the playful Galapagos Penguins and Sea Lions.

*This desolate island with few plants is the most visited and most photographed island in the Galapagos. The island consists of an extinct volcano and a variety of red, orange, green, and glistening black volcanic formations. The best known of the island's features is the Tuff Cone known as Pinnacle Rock. This large black partially eroded lava formation was created when magma expelled from the volcano reached the sea. When the seawaters cooled the hot lava it caused an explosion. The exploded particles eventually fasten together forming a rock composed of thin layers. Bartolome's Pinnacle Rock has become one of the best recognized and most photographed sights in the islands. A prominent sight it was used as a target for US airmen during WWII. Lying beside the Pinnacle Rock are twin half-moon shaped beaches.

The northern beach is a popular snorkeling site where visitors have the opportunity to swim with fish, Sea Lions and Galapagos Penguins. Much larger animals can be found near the southern beach including stingrays, spotted eagle rays, white‐tipped sharks, and black‐tipped sharks. Little vegetation grows in this barren place. Mangroves border the beach and the small shrub Tiguilia grows in the volcanic sands. The seeds and tiny white flowers of the Chamaesycae provide food for the island's finch. These plants are common to arid regions and are able to survive in these harsh volcanic conditions.

*In the morning, a panga boat ride to Caleta Tortuga, also known as Black Turtle Cove. There is no landing at this sight. It is located on the north side of Santa Cruz Island and the way to reach it is by a panga boat (motorized canoe). You will be able to see its mangrove swamp where marine turtles are nesting during certain seasons of the year, as well as sharks and rays.

From $1,500.00 per person
All departures and prices are subject to availability. Please Contact Us to confirm preferred departure 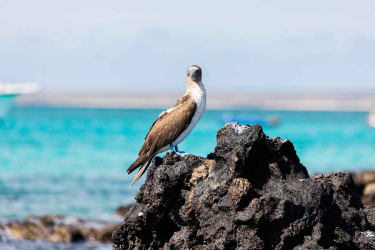 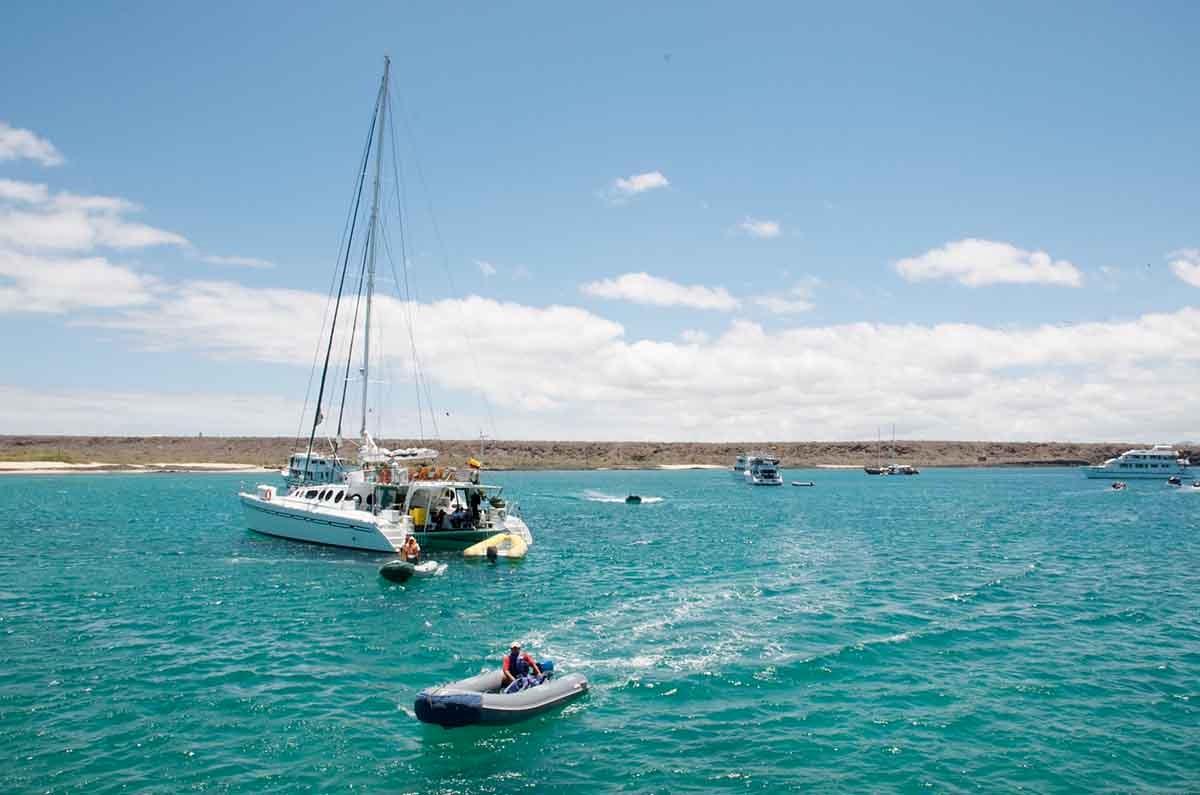 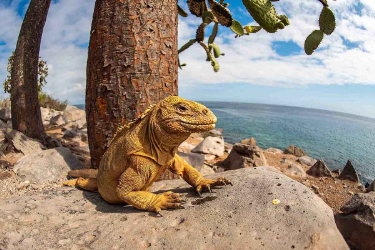