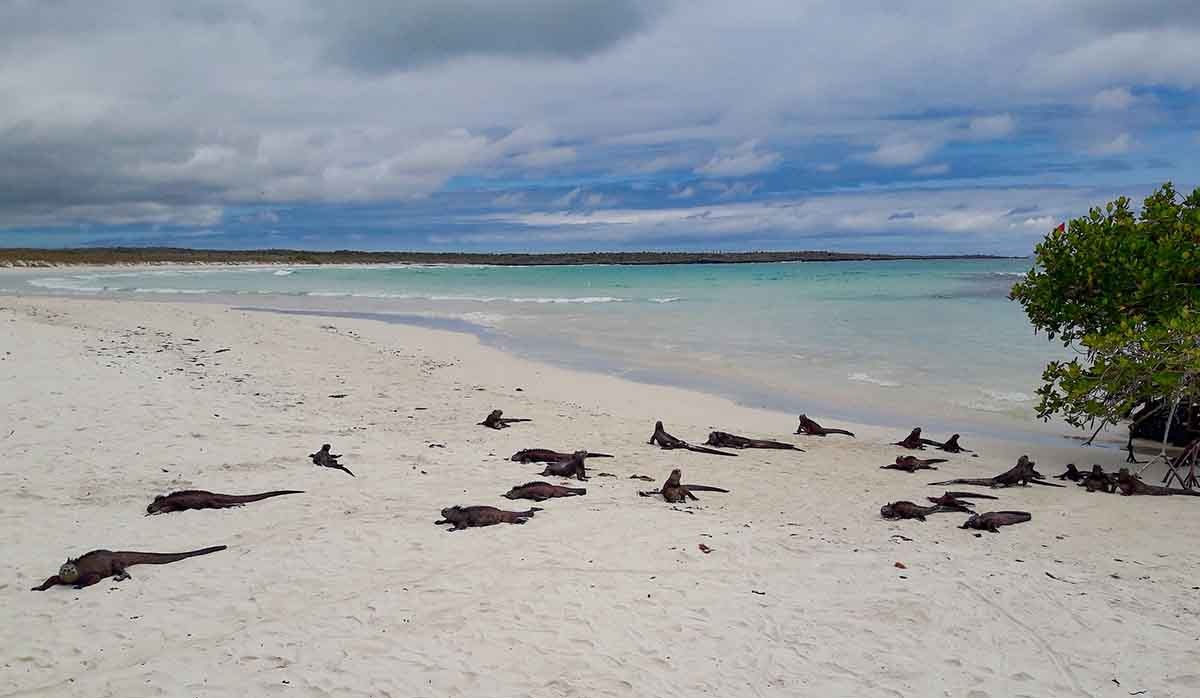 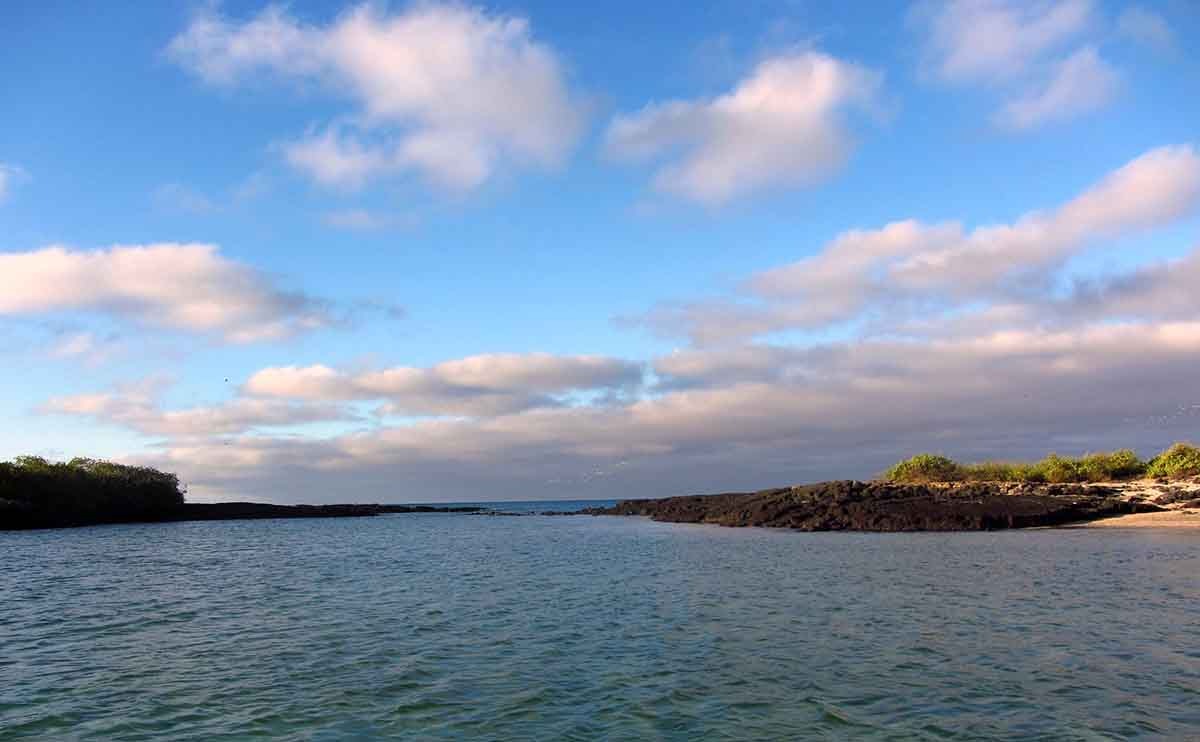 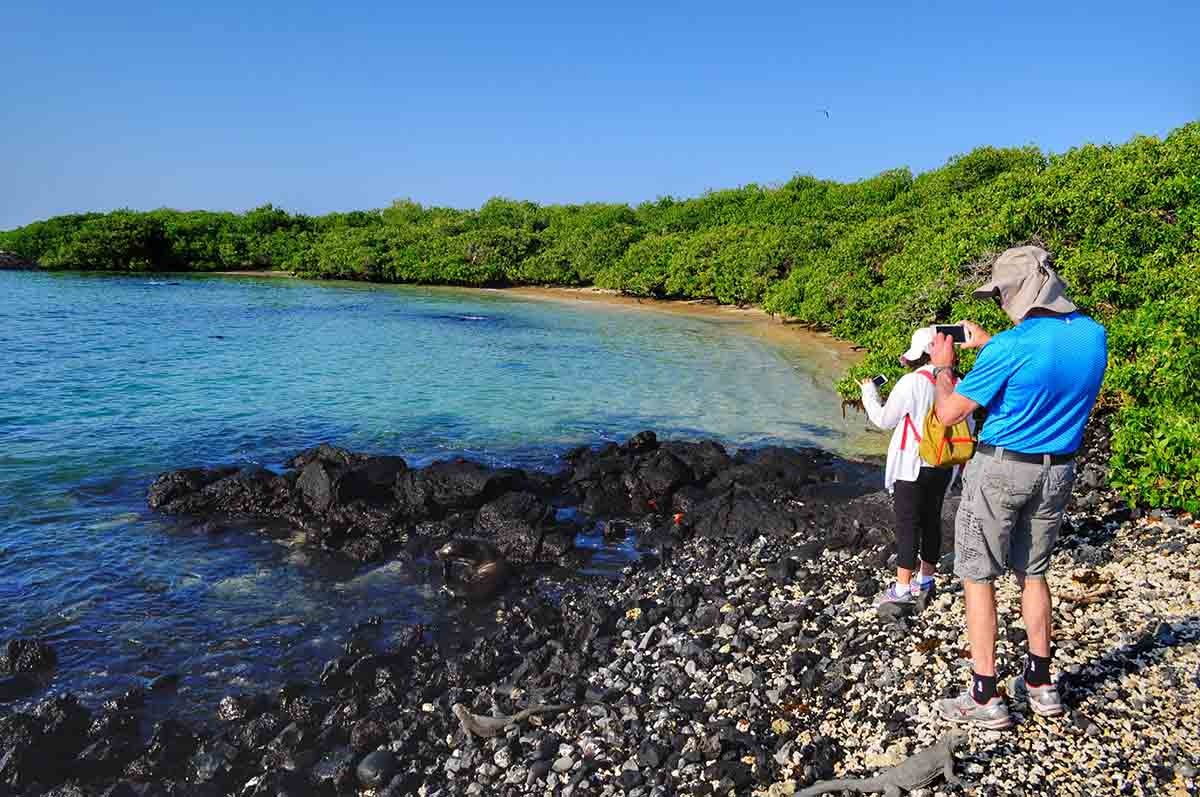 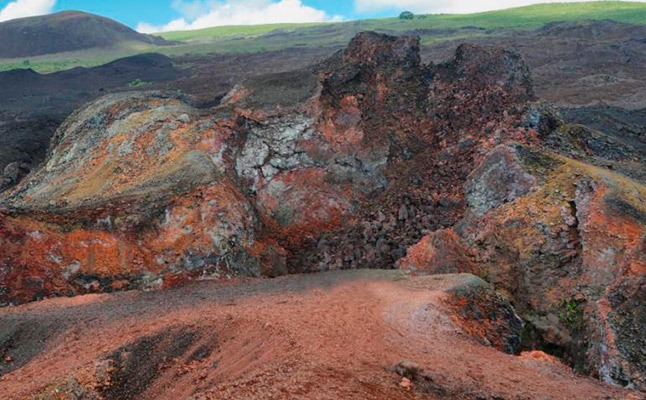 Discover four of the wonderful islands in Galapagos. You will have time to choose the best place that will take you to connect with nature. You will enjoy close encounters with the islands famous wildlife, while hiking, snorkeling or swimming in its turquoise waters.

Arrival in the Galapagos

Today we arrive in Baltra Island, the gateway to the Galapagos. This tiny island was a military base during the Second World War and hosts the Islands’ principal airport. The airport was built using the most advanced environmental techniques to reduce emissions and energy use, some of which you’ll notice as you walk through the facility. This was the first ecological airport in the world.

We dive into our adventure as soon as we arrive! We enter the airport through a special VIP lounge where you will have a chance to change clothes, put on some sunscreen and get a cool drink before we transfer to the Itabaca Channel to explore its spectacular turquoise waters. We will have a chance to kayak, snorkel and stand up paddleboard (SUP), as well as encountering some of the most famous Galapagos wildlife such as blue-footed boobies, sea lions, brown pelicans, a variety of herons and white-tipped reef sharks.

There’s no better introduction to the Galapagos than to get on the water as soon as possible! We will glide through beautiful red mangrove forests and along lava rock cliffs on water so clear we can see the marine life in the shallows. Our ocean (sit on top) kayaks come in doubles or singles, and life jackets are provided. A support boat will escort us throughout our water activities to ensure safety and to provide water, snacks and towels between activities.

From the Itabaca Channel we head up to the Santa Cruz highlands to a private reserve that borders the National Park, where we can see the famous Giant Tortoises roaming in the wild.

After lunch we drive to our exclusive giant tortoise reserve where our tented camp is located. Perched high on a hillside overlooking the ocean, Magic Galapagos Tented Camp will be our home for the next two nights. The sounds of nature will serenade us in the evenings, and the Milky Way will be our night light. We’ll be able to feast our eyes on the mountains and forests surrounding the Camp, and enjoy the peace of having the entire hillside to ourselves, with the exception of seasonal resident giant tortoises.

Watching the colorful sunset from Magic’s western perch is the perfect segue into evening. Dinners are sumptuous three course affairs, prepared by expert chefs in an open-air kitchen in the main lodge. A favorite post-dinner activity is a short walk to the reserve’s natural lava tubes, for a night cap in the one-of-a-kind ‘Lava Lounge!’ It’s the perfect spot to relax around the fire and share stories from the day’s adventures.

Today we will set out on our motor yacht for a visit to some of the more remote uninhabited islands with their exuberant wild life. The friendly and knowledgeable crew members and naturalist guide will help you to experience the remote islands in comfort and style.

** These excursions are subject to availability and change without prior notification

After a final breakfast at Magic Galapagos, we say goodbye and depart for Floreana Island. We will leave early for our two hour speedboat crossing.
This peaceful island is home to the Galapagos’ smallest human population. Because only 150 people call Floreana home, it is the least developed and most natural of the four inhabited islands. It was the first inhabited islands in the Galapagos, and descendants of the original population still live here. Once a pirates’ lair, the island’s history is full of mystery and legends about its first inhabitants.

During our stay, we will be hiking, learning about the fascinating local history and also seeing some of the Galapagos’ special wildlife. We may see giant tortoises, frigate birds, sea lions, Darwin’s finches, petrels and marine iguanas, among other species.

Upon arrival on Floreana, we will take an open-air ‘chiva bus’ to Floreana Lava Lodge, which overlooks one of the Galapagos’ most beautiful and secluded bays. The lodge is operated by Claudio Cruz, a descendant of one of the Island’s original inhabitants. We are lucky to be hosted by Claudio, as he is able to share his deep knowledge of the Island and its history with us, as well as to meet several of his family members during our stay, giving us special insight into life on Floreana.

Once we are settled in, we can walk or paddle (kayak or stand up paddleboard) to nearby Black Beach for some snorkeling. After time in the water to whet our appetites, we will walk to a restaurant in the nearby village for lunch. The restaurant is part of a community tourism initiative that Tropic helped to develop and has been working with since 2012.

In the afternoon, we set out once again to paddle the pristine waters (kayak or SUP) across the bay to explore La Loberia, a sea lion breeding ground. Once there, we can enjoy more snorkeling and swimming in the calm, bright water with sea turtles, sea lions, stunning rays and an abundance of tropical fish.

Later we will return to the lodge (30 minute walk or kayak/SUP) for a warm shower. We will watch the spectacular sunset and then head to the village for dinner where we will celebrate another incredible day in the Galapagos.
Exploring the Floreana Highlands

After breakfast, we leave to explore the Floreana highlands on our open-air bus (chiva) – an unbeatable, historic, and comfortable way to see the island.

On the way, our naturalist guide will share the colorful history of some of Floreana’s first inhabitants, such as the Wittmers (whose descendants still live on the Island), the ‘Baroness,’ and the pirates that once visited here. They will also tell us about the “Enigma of Floreana,” involving the mysterious deaths of several of the Island´s inhabitants. The enigma is a riddle from the 1930’s that has never been solved and was featured in the film “The Galapagos Affair.”

After driving into the highlands, we reach Asilo de la Paz (Peace Haven) where our hike begins. We walk up to this historic site, explore the pirate caves, and visit the freshwater spring that provides water for the entire Island, with our guide sharing stories and history along the way. As we traverse the hillside, we can expect to see giant tortoises lumbering around in the vegetation or even on the trail.

We depart Asilo de Paz walking down through a rural area where the local people grow produce for their own consumption. This is a fascinating example of how the island people survived in this remote place and over the years were able to develop an understanding of the local environment and now work to preserve their unique agricultural knowledge. On our way back to the coast, we will make a stop at Claudio’s farm, La Primavera, where we will watch the extraordinary behavior of the frigate birds who ‘dance’ as they wash their salty wings in the fresh water lake on the farm. With a little bit of luck, we may be able to see males puffing up the red pouches on their chests in an attempt to attract females. We’ll also see where some of the delicious fruit and vegetables that we’ve been eating at the lodge come from.

From La Primavera farm we continue by chiva down to Las Palmas, where the Island’s first permanent inhabitant, the eccentric Dr. Ritter, lived and is buried. Arriving in 1926, the German physician believed that with a combination of exercise and the right vegetarian diet he would live to be 150 years old. He didn´t, but his story is one of the many strange episodes that make up the intriguing history of the island. Making our way back to the lodge, we will be treated to spectacular views of the Floreana shoreline.

After lunch, we have a free afternoon. Practice your kayak or SUP skills, go snorkeling in La Loberia or simply relax and take in the beautiful Galapagos views from the Lava Lodge.

Galapagos in Miniature. Transfer from Floreana to Isabela

Today we take an early morning speed boat and transfer to Isabela Island where we will check into our hotel.

Our Isabela adventure begins with a tour to the local giant tortoise-breeding center and on the way we may catch a glimpse of pink flamingos feeding in a lake. Once at the Center our guides will explain the process of breeding and then releasing into the wild these giant slow moving creatures whose Spanish name (meaning saddle) gave the Islands their present title. The breeding center is an important conservation tool and it is here that the islands’ giant tortoise population is presently recovering.

In the afternoon we will continue with our tour to the Tintoreras, a group of small islands near the village of Puerto Villamil, that are named after the white tipped ‘Tintoreras’ reef sharks that swim in these calm waters. A Galapagos in miniature on the Tintoreras you will see almost all of the archipelago’s iconic wildlife: white tipped sharks, sea lions, turtles, rays, penguins, and of course pelicans and blue footed boobies. You will have a chance to snorkel in the bay – and don’t be surprised if some of the penguins or sea lions jump in to play alongside you in the water.
Hiking day!

Volcanic eruptions created all the Galapagos Islands, and you will have a chance to see this geologic process first-hand as we explore Isabela, one of the archipelago’s youngest and most volcanically active islands.

We have the whole day to explore the Isabela highlands, and we start by hiking up to the crater of the massive Sierra Negra volcano, and then onward to the rim of the Volcan Chico. This fascinating walk usually begins with some morning fog and drizzle, which sometimes persists in the shadow of the volcano, adding to its mysterious character. Despite the drizzle, we may see Galapagos Hawks, finches, flycatchers and Short Eared Owls en route.

When we reach the rim of the Sierra Negra crater, the second largest in the world after the Ngorongoro in Tanzania, we will see the reward for our efforts. The crater is so large, and the views so expansive, photos can’t do it justice, but bring your binoculars and camera anyway!

Later, as we head towards Volcan Chico, we may get the feeling we are walking on Mars due to the alien landscape. And while the land appears to be utterly desolate, a closer look will reveal small lizards scurrying about among the rocks. From the crater’s rim, we will enjoy more amazing views along with lava tubes and fumaroles.

After Volcan Chico and its extreme landscape, we will be able to relax in the shade of a lovely “jaboncillo” tree, and enjoy our box lunch while taking in the spectacular and expansive views over the central and northern parts of the Island. In the distance, we will be able to see Fernandina, Pinzon and Santa Cruz Islands. We then head back down to complete our day of hiking (16 kilometers / 9,94 miles in total) and relax on the beaches of Puerto Villamil.

Today we take an early morning speed boat back to Santa Cruz and then transfer by land to Baltra for our onward journey or flight back home.

Hotels to choose for this Tour 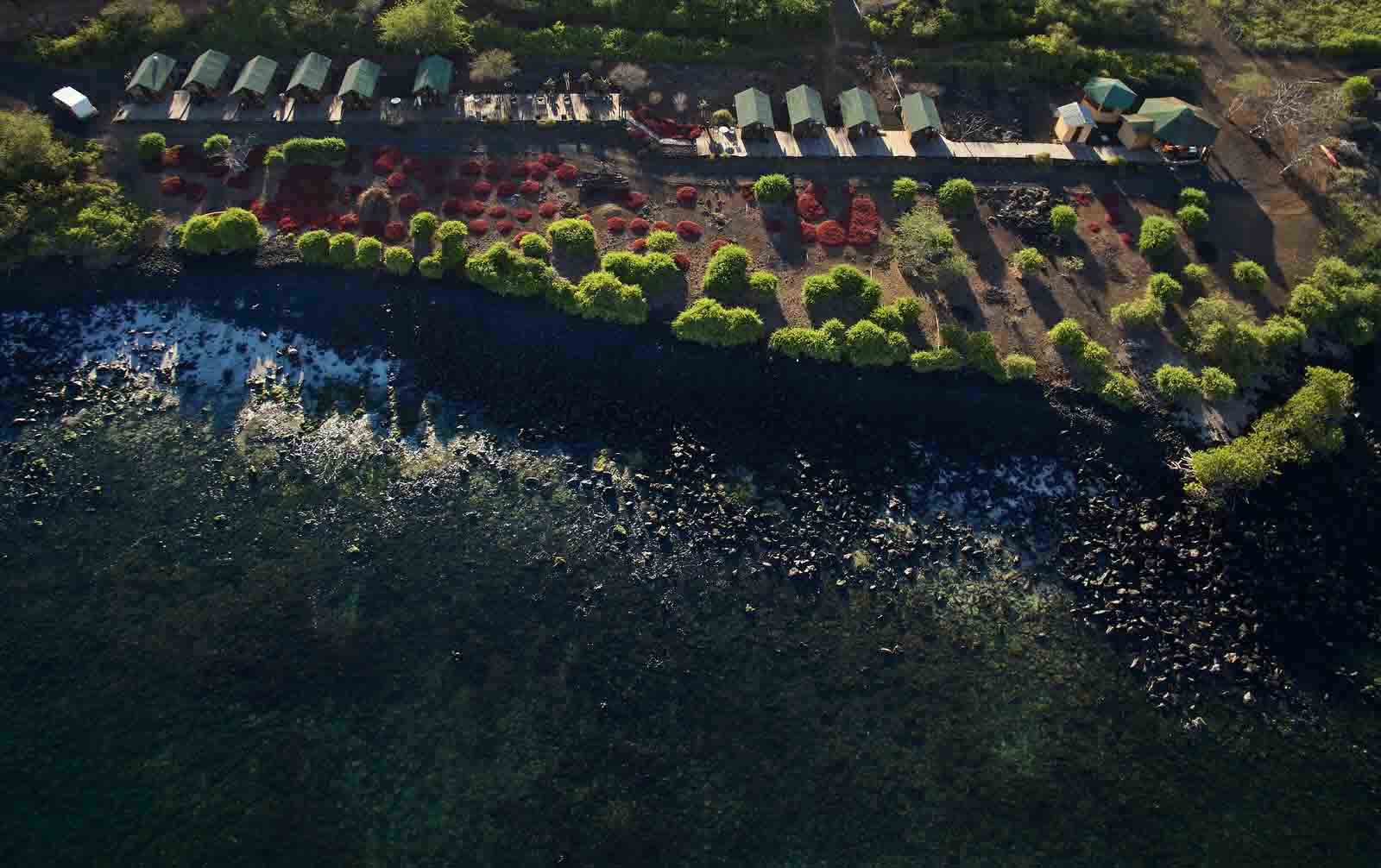