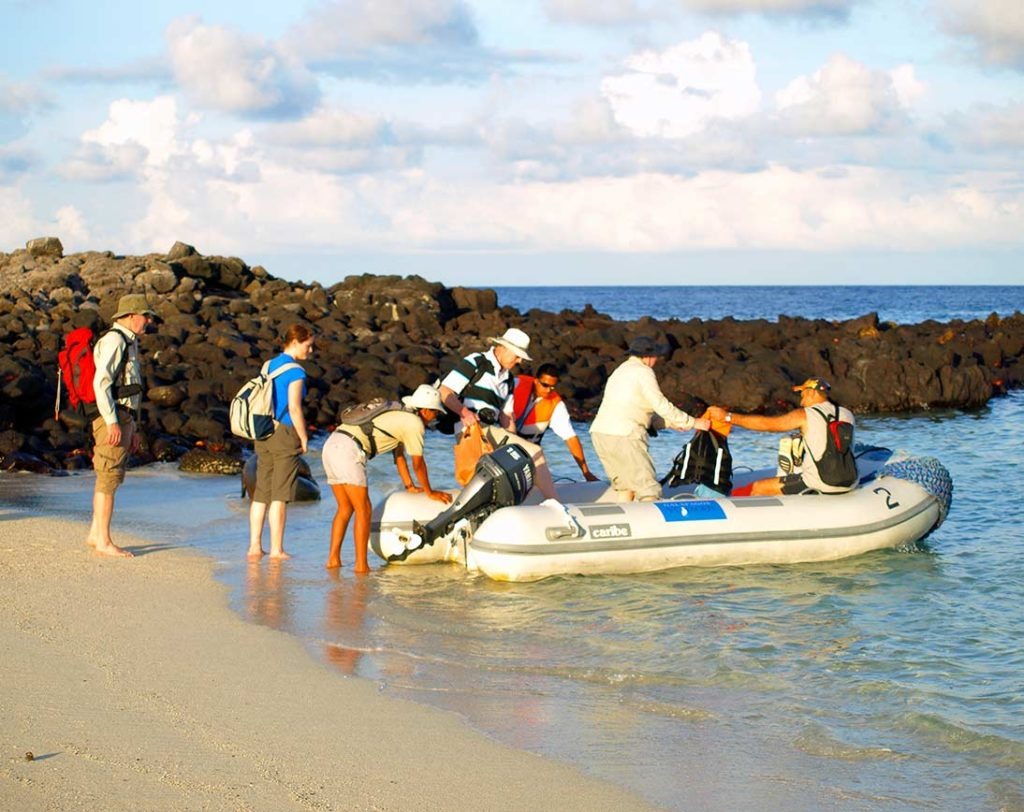 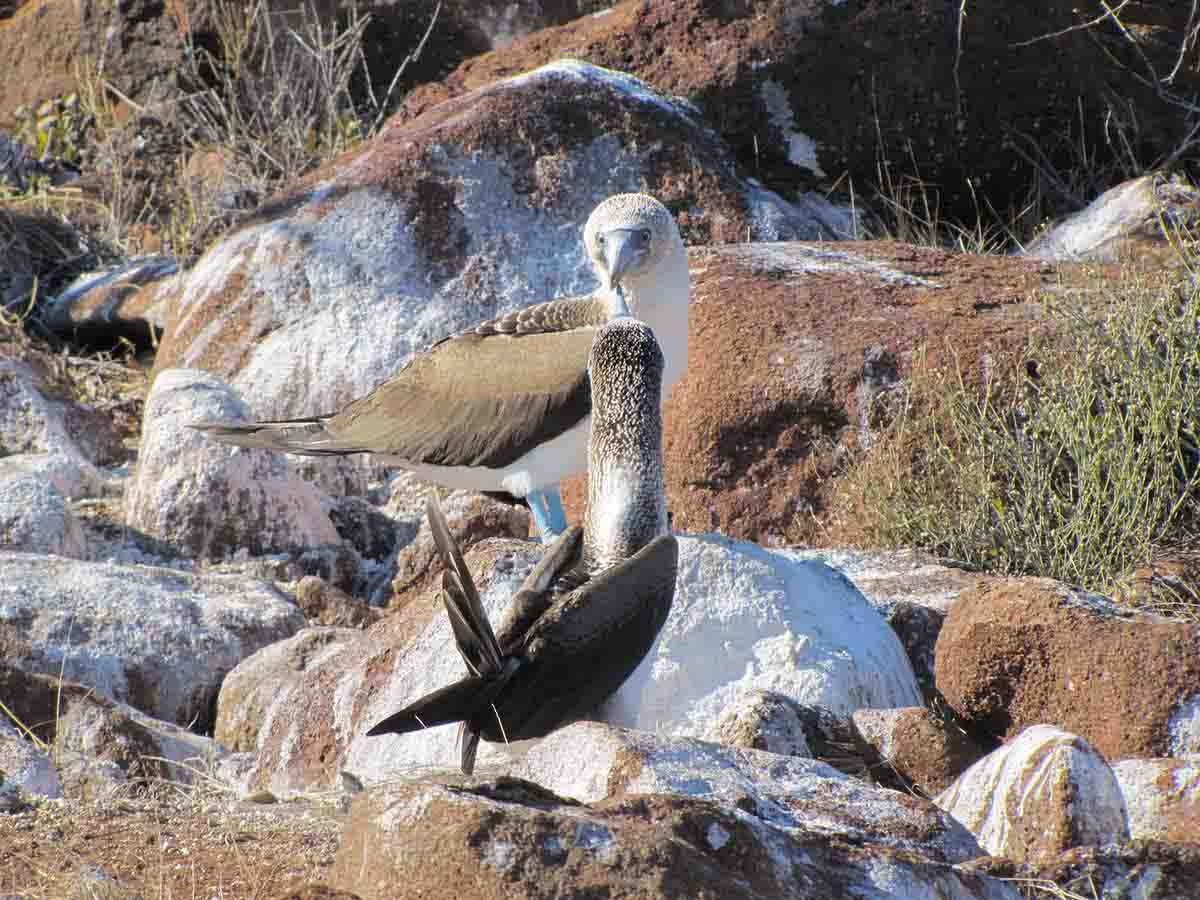 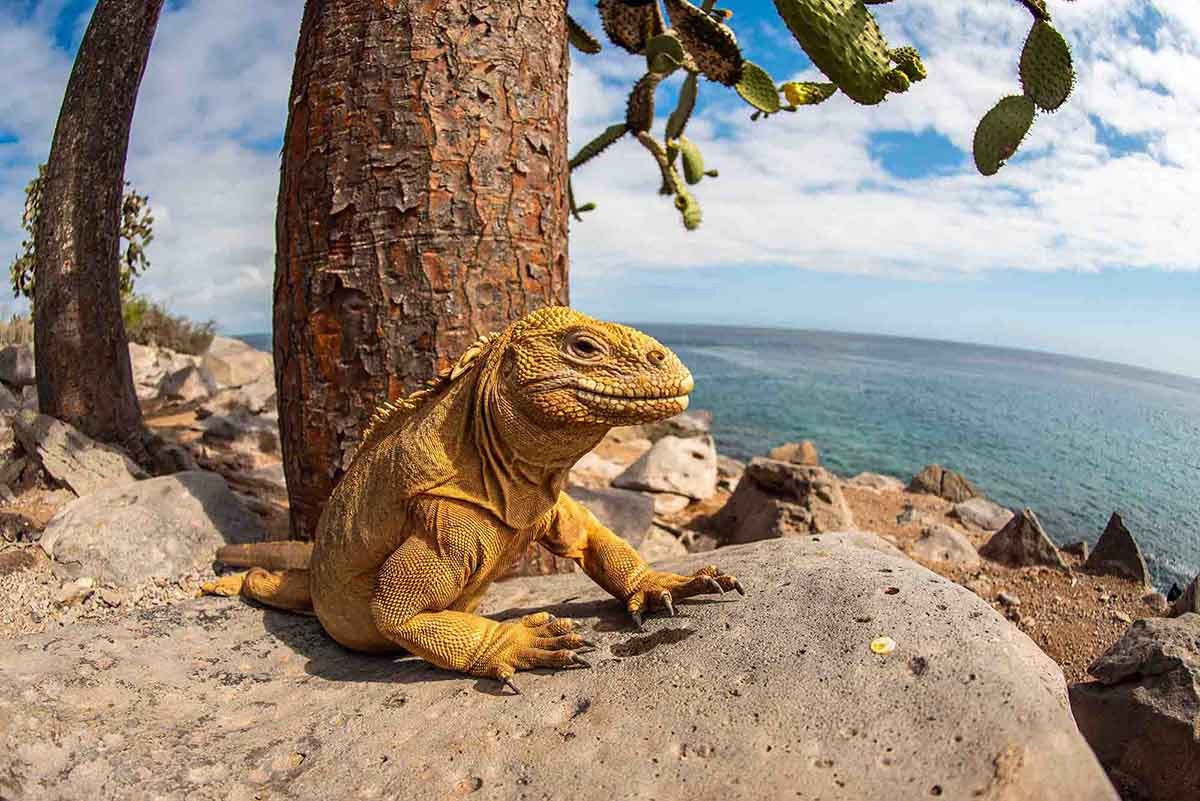 At a glance: From the airport, head directly to the highlands of Santa Cruz to explore sink-holes and giant tortoise reserves ▪ Arrival at Baltra airport

Your Galapagos Safari begins when you meet your bilingual naturalist guide at the airport. To maximize your day, you will be taken to a number of visiting sites in the highlands on the way to Galapagos Safari Camp. Your baggage will be sent ahead to Galapagos Safari Camp. Upon exiting the airport, you are driven to a small dock on Baltra Island (keep an eye out for the land iguanas!). Here you will transfer to a boat to cross Canal Itabaca, the narrow passage of water separating Baltra Island from Santa Cruz Island. Once on the other side, you will transfer again to a private car for a 30-minute drive through various vegetation zones to the lush highlands of Santa Cruz. The first stop is Los Gemelos (The Twins); two colossal, volcanic sinkholes (the larger of the twins is 2,300 feet deep and almost 1,300 feet wide). On a short hike around the rim, your guide will point out the birds of the endemic Scalesia forest such as Galapagos doves and the eight species of Galapagos finches. From Los Gemelos you continue to a giant tortoise reserve. Here you will learn how the physiology of these ancient reptiles is different, depending on the island they inhabit. There are currently 12 species of the giant tortoise in the Galapagos Islands, two of which are native to Santa Cruz. Your tour of the reserve will take you on a gentle circuit trail where you get within meters of these iconic Galapagos creatures. Keep a look out too for short-eared owls, if you are lucky they can be spotted in the trees. The reserve also contains a network of underground lava tubes, formed centuries ago when lava flows cooled at the edges but kept flowing in the middle, leaving cave-like tunnels in their wake. Some of these tunnels on Santa Cruz go on for miles and are thought to have been used by pirates as hideouts or to store supplies. Descend into the cavernous tubes with your guide for an introduction to the islands’ formation. To fully appreciate the uniqueness of the Galapagos Islands and its wildlife, it’s important to first understand the archipelago’s geology and volcanic history. For some, the experience may be a little daunting in spots where the tubes get narrow, but it’s a worthwhile trek into the geological past of the island. After stopping for lunch, the group makes way back to the camp. Enjoy a dip in the pool alongside the finches, or a hot shower in your tent before unwinding on our Viewpoint with a sunset cocktail. End the day with a four-course dinner under a starry sky.

Wildlife often seen on this tour:
At a glance: Today you will explore the eastern corner of Santa Cruz, from the lush highlands to the arid coastline.      Level of Privacy: Private (private car transfers, private guide)   Just a 35-minute drive from the camp, your day will begin at Cerro Mesa, a private reserve, rich in endemic flora and bird life; with six subspecies of finches, mockingbirds, and short-ear owls. The area is also home to Galapagos tortoises, endemic to Santa Cruz.  Explore the various trails with your guide, ending the circuit at a viewpoint where, on a clear day, you can survey the lush landscape of Santa Cruz as well as nearby islands.    You will then make your way to Garrapatero Beach, either by car (15 minutes from Cerro Mesa) or by bicycle (a gentle eight-mile ride).  Weather permitting, a picnic lunch will be served for you in a tree shaded area next to the beach.   In contrast to the thick, green vegetation of the highlands, the coastal terrain is made up of black lava, white sands, turquoise waters and dense mangroves. Here you’ll find numerous species of Galapagos finches, including the cactus finch which feeds off the Opuntia cacti that dot the trail on the 15-minute hike from the car park to the beach. As the beach comes into sight, watch out for the Manzanillo trees along this path. The small apples on their branches are inviting but poisonous. Even the sap can cause burns and rashes to the skin.    Other creatures above and below the waterline that call Garrapatero Beach home are marine iguanas, sea lions, blue-footed boobies, rays and sea turtles. Skirting the beach is a freshwater lagoon where you can often spot flamingos, white-cheeked ducks and black-nested stilts.    Just past the tide pools on the beach, clear waters offer a secluded spot for swimming. We can also arrange kayaking here; a great way to explore the bay and its wildlife. As Garrapatero Beach is generally off the beaten path, you may even have it all to yourself.   On your way back to Camp you will visit El Trapiche Ecológico, a working farm in the highlands that produces sugar cane liqueur and Galapagos coffee. Learn about the different methods used to refine sugar cane, including the use of a mule-driven press.  There is also a demonstration of how artisan coffee is produced, from picking the berries to roasting the bean.   As the day winds down, you head back to the camp for a relaxing drink or dip in the pool before an inviting dinner and some independent stargazing if it is a clear night.
Key Experiences:    Wildlife often seen on this tour:
During your five-day safari, you will be able to visit two of the islands described below (please note destinations will depend on dates).   After breakfast you will be transferred to the dock (30 minute drive).  Once onboard, you will navigate to your destination and spend the rest of the day with the group’s guides exploring, walking, snorkeling and you will end the day back at camp.

Our day starts with a hike up a 600-meter wooden boardwalk and stairway across ancient red, black and orange lava fields to the highest point on the island.  The panoramic view from the lookout surveys the iconic Pinnacle Rock in the foreground, Sullivan Bay in the distance, and Daphne Major and Minor on the horizon. Following the hike, we enjoy a dinghy ride around the coastline, looking for Galápagos penguins and hawks resting on the cliffs. In the afternoon, we explore the shore, where sea lions, Sally Light-Foot crabs, and marine iguanas greet us on the beach. This is a great place to snorkel, discovering the colourful underwater world of the islands amongst playful Galápagos sea lions, penguins, reef sharks and rays.

This island is among the oldest in the archipelago, with underwater lava formations dating back 3.9 million years. Its visitor trails are bursting with animal activity. Santa Fe is home to a healthy population of terrestrial iguanas including the Santa Fe yellow iguana, as well as the inky-black marine iguanas. Other residents include Galápagos hawks and blue-footed boobies. Friendly sea lions line the shores and swim besides you when snorkelling, while marine iguanas bask in the sunshine on shoreline rocks, or dart quickly past under the waves. We can also hope to observe sharks, rays, and colourful schools of fish.

This island, brimming with life across its rocky surface, hosts blue-footed booby and frigate mating colonies. Land iguanas also frequent the area, seen along the 2-mile trail that loops around the southern section of the island. As we begin our walk, we come across nests of comic-looking blue-footed boobies.  Galápagos mockingbirds and yellow warblers are often spotted. As we draw near to the frigate colony, the remarkable birds seem to be nesting in every surrounding tree. Males inflate their red, basketballsized pouches to attract mates.  Back in our dinghy, we head to Mosquera islet, in the channel between Baltra and North Seymour. Here we can find a large sea lion colony, full of pups, bulls and females of different ages.

While en route to Plaza, we stop at Punta Carrión. The shallow waters of the sheltered cove make a fun place to snorkel with schools of fish, rays and, if we are lucky, reef sharks. The dock at South Plaza is usually overrun with sea lions, but we can manoeuvre round them to start walking along the trail that winds its way past yellow land iguanas resting in the shade of groves of prickly pear cactus trees. The landscape is vibrant, the black lava outcrops and ground carpeted with the reds and yellows of sesuvium cactus. At the island’s southern cliff edge, we can observe all sorts of birds swirling in the currents, including dazzling red-billed tropic birds. Following the trail round to the west, we come to a busy sea lion colony.  South Plaza’s other residents include land and marine iguanas, Nazca and blue-footed boobies and swallow-tailed gulls and other species of birds.
At a glance:   Today you will spend the day with a local fisherman who will take you to remote corners of Santa Cruz’s shoreline.      Level of Privacy: Private (private car transfers, private guide)     Spend a festive day with a local fisherman learning the tricks of the trade while exploring the sea and discovering her creatures. This trip is part of a program with the Galapagos National Park, which gives fishermen an alternative means to support themselves and reduces the strain caused by overfishing.   Traveling by a fully-equipped motorboat with seasoned fishermen to in-the-know spots, this trip gives all involved a chance to explore the hidden coves around Santa Cruz. Passengers are given a hands-on lesson in how locals fish in the Galapagos, and then try their luck at catching dinner. The Galapagos National Park sets limits on how many fish each group can catch, capped at 50-pounds per trip.  The crew are at the ready to show those who pull in fish how to make sashimi on the boat, or you can take your catch back to camp, where the kitchen is happy to prepare it for you.     Stopping at secluded beaches and snorkeling in the open water are highlights of the journey; depending on sea conditions our crew takes you to La Fe, Playa Escodida or Bahia Borrero, away from the throngs of tours on other parts of the islands. This is a chance to experience the exotic beauty of the Galapagos, a step back to the days when people were in short supply. Relax on the beach, or snorkel and swim in the turquoise waters alongside rays, colorful schools of fish, and sea lions.
Key Experiences:
Wildlife often seen on this tour:
Enjoy the serenity that Galapagos Safari Camp has to offer. Relax, walk, or enjoy the sunrise from our observatory before departure to your next destination. (Here’s where you’ll wish you had extended your journey!).   Meals Included: B Our African-styled tented camp is a creative alternative to exploring the archipelago and soak nature in all comfort. Nestled in the wild highlands of Santa Cruz Island with stunning views of the Pacific Ocean and the National Park, our stylish camp offers a panoramic lodge, nine charming tents, a family suite

Hotels to choose for this Tour