A key part of understanding the unique environment of the Galapagos Islands is gaining an appreciation of how and why they came into existence, the specific circumstances that created them and the Geology that forms this spectacular landscape.

Like many other oceanic islands, the Galapagos Islands are the product of a mantle plume. This happens when a section of rock, deep within the earth’s surface (the exact depth from which the plumes originate is still a matter of debate) becomes superheated, up to 200˚C hotter than normal.

The extreme heat makes the rock less dense than the surrounding Geology, causing it to rise up through the earth’s surface until it reaches the cooler temperatures in the outer layers and is prevented from rising further by the overlying Lithosphere.

As the plume decompresses and cools, it begins to ‘melt’. This melt, or magma, forms in microscopic channels that, as they’re less dense than the surrounding rock, rise rapidly to the surface, forming magma chambers as they meet in the lithosphere.

Occasionally, the magma trapped in the chambers of the lithosphere – still at temperatures of around 1400˚C – forces its way upwards, producing a volcanic eruption on the surface.

Successive eruptions over thousands of years begin to form a volcano. And this, combined with the constant upward force of the plume on the lithosphere, forms the Galapagos platform.

This environment, though relatively young compared to the rest of the earth’s geology, has been slowly developing over hundreds of thousands of years, gradually forming into the unique biosphere that we see today. A landscape truly born from the very depths of the earth’s core.

It is possible to visit the Galapagos geological wonders on a Geology oriented tour, specific sights of interest would be Sullivan Bay and Bartolome Island as well as the lava tunnels in the highlands of Santa Cruz amongst other remnants of volcanic activity.

Geology: Volcanic origin of the archipelago of Galapagos

As land masses go, the Galapagos Islands are not very old. A Galapagos volcanic flow and creation little over four million years ago there was open ocean where they now lie, on the equator some 600 miles west of Ecuador. But submarine volcanic activity slowly built up the string of islands that Darwin visited in 1835. Indeed, it was Darwin who first recognized their volcanic origin, and who understood the profound implications of this origin for the history of life. For if the islands were volcanic, they must have been formed after the creation of the world, and the organisms living there separate from the mainland must have migrated there from someplace else. But since those organisms are found nowhere else, Darwin finally had to conclude that they had evolved there from South American ancestors.

After Darwin’s visit, and well into this century, the origin of the islands has been disputed. Many thought that they had once been part of the mainland, or connected to it by a land bridge. Eventually, however, Darwin was vindicated; these islands had a volcanic origin separate from the mainland and were never connected to it. 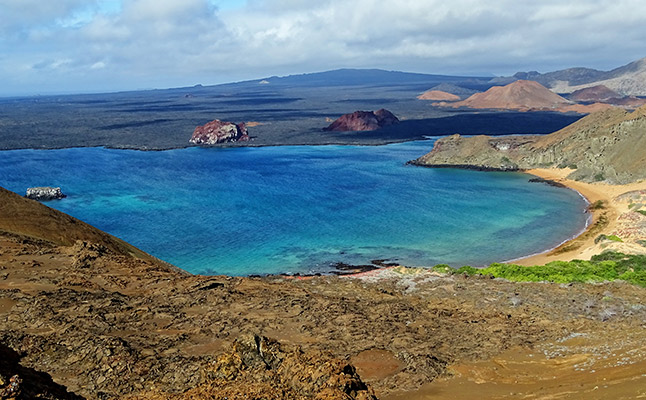 Geology: Studies of Nazca and Cocos plate tectonics in formation of Galapagos

A somewhat more complete answer to the origin of the Galápagos could not be had until after 1958, when continental drift, or plate tectonics, was discovered. We now understand that the surface of the earth is divided into massive tectonic plates which slowly drift across the globe. The formation of the Galápagos is intimately tied to the history of the Nazca plate, on which they lie.

As the Nazca plate is forced into the mantle, it melts and its melt products work their way up to the surface to form volcanoes. The land is further raised by the crumpling effect as the western edge of the continent rides up over the descending plate. The result of all of this is the Andes, a young, highly volcanic, rapidly growing mountain chain. This same movement of the Nazca plate is responsible for producing the cluster of volcanic islands we call Galapagos.

There is a large body of geophysical evidence for the existence of enormous plumes of hot mantle material that originate near the earth’s core and rise all the way to the crust. These plumes seem to be stable over many millions of years. and with time, they burn through the crust to form an underwater volcano which may eventually grow big enough to become an island. But, because the crustal plate is in constant motion, the island will eventually move off of the hot spot, thereby making room for a second volcanic island, and a third, and a fourth… Thus are archipelagos like the Galápagos formed.

Islands farthest from the hot spot are older and more eroded, while islands near or on the hot spot are younger and steeper. Thus Isla San Cristobal, the nearest to the mainland, is approximately four million years old and composed of eroded, rounded cones, while Isla Fernandina dates at less than 7000 years and is considered to be one of the most active volcanoes in the world. Recently former Galápagos islands, now submerged, have been discovered between Isla San Cristobal and the mainland. This discovery may double the age of the islands. Indeed, several million years from now the present islands may likewise sink beneath the waves only to be replaced by a new set of Galápagos Islands. Who can imagine what course further evolution will take!? 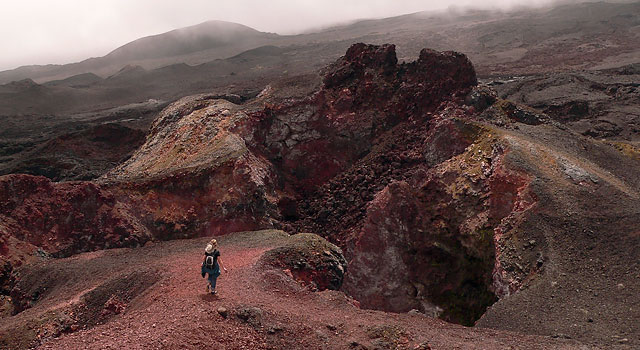 Geology: These volcanic formations allow to study the geology of Galapagos

In addition to outflow from the central crater, lava can also flow from vents and fissures around the sides and edges of the main volcano. As a fissure eruption progresses, the outflow tends to become localized to one or a few spots along the fissure. These spots tend to build up small cones, often referred to as parasitic cones. These parasitic cones are generally of two types: spatter cones and tuff cones.

A good example of spatter cones are those seen on Isla Bartolome, adjacent to the large island of Santiago. As magma flows out of the vent, dissolved gasses are released, often causing gobbets of lava (de-gassed magma) to be tossed up into the air. These gobbets cool and semi-solidify in the air, and then fall back and land in “splats” to eventually form a small cone.

Tuff cones tend to be found at the water’s edge or just offshore. Tuff is a rock composed of extremely fine-grained volcanic ash cemented together. It were cones like these that Darwin found most interesting, and it was Darwin who first explained how they are formed. Such cones are formed by what we now call a phreatomagmatic eruption. When seawater enters into the vent and contacts the magma, it flashes to steam and explodes upward. The explosion carries with it magma that has been fractured into droplets that form very tiny fragments. These fall back around the vent to form tuff. This tuff is often later chemically modified into a yellowish mineral, called palagonite. Darwin also noted that southeast rims of many tuff cones are low. This, he believed, was due to the trade winds which blow out of the southeast. These winds would result in increased deposition of ash on the northwest side of the cone during the eruption, and greater erosion on the southeast after the eruption. Classic examples of tuff cones are found around James and Sullivan bays and Buccaneer Cove, Santiago, and around Pinnacle Rock, on Bartolome. A small tuff cone at Buccaneer Cove and the cone that formed Pinnacle Rock have been eroded to reveal a cross-section of their interior. 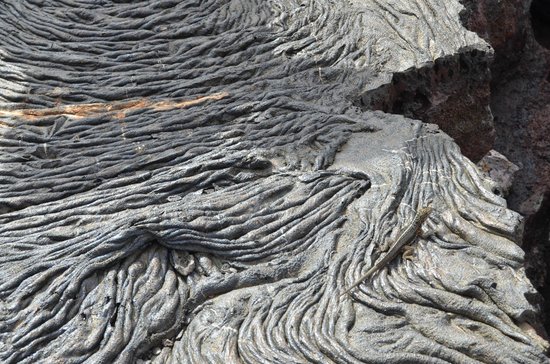 Basaltic magma produces two characteristic types of lava flows. Since most of the research on island vulcanism has been performed in Hawaii, the names of these flows are Hawaiian – pahoehoe (“ropy”) and aa (“hurt”). These two types of flows have distinctly different appearances, although their chemical make-up may be quite similar.

Pahoehoe is smooth, with a twisted, or ropy texture while aa is sharp and blocky (it hurts to walk on it). During a pahoehoe flow, the outer skin of lava cools and becomes viscous. The underlying lava, however, is insulated and remains quite liquid. As it flows, it carries the cooler skin along with it, causing it to crumble and fold into twisted shapes. Early in the flow, when the lava is hotter, these twists have the appearance of ropes, but later, as it cools and becomes more viscous, the twists are shaped more like entrails. Underneath the solidifying surface, the liquid lava continues to flow, often draining out and leaving hollow cavities which later collapse.

Aa lava, in general, is more viscous. The outer skin tends to form a rubbly, sharp-edged surface. As the flow moves along, the surface rubble at the edge of the flow falls off of the front edge and is over-ridden. Thus, a cross-section of an aa flow reveals a rubbly surface, a solid inner layer of slowly-cooled magma, and finally a narrow zone of over-ridden rubble. The differences between pahoehoe and aa lavas are subtle, but one important aspect is the speed of flow. Flows over steeper terrain move more rapidly and tend to be of the aa type while slower flows tend to form pahoehoe.

In Galapagos, aa flows tend to be more abundant than pahoehoe flows, but they are rare at visitor sites – for obvious reasons. One well-known aa flow can be seen on Fernandina. The best place to see a pahoehoe flow is on Santiago. Just before the turn of the century, massive lava flows covered the southern part of the island, extending from Sullivan Bay on the east side, around to James Bay on the west. Visitors who walk on the Sullivan Bay flow are often profoundly affected by the seemingly endless barrenness of the lava. At Punta Moreno, on the west side of Isabela, visitors have the opportunity to walk out on a lava flow that is about 1,000 years old. It is interesting to compare the two lava flows. At Pta Moreno, the lava has been oxidized from shiny black to dull brown, and it much more broken. Stepping over the lava fragments results in loud clinking sounds (these rocks are often called “clinkers”) and there is a much greater variety of plants growing there than can be found at Sullivan Bay. 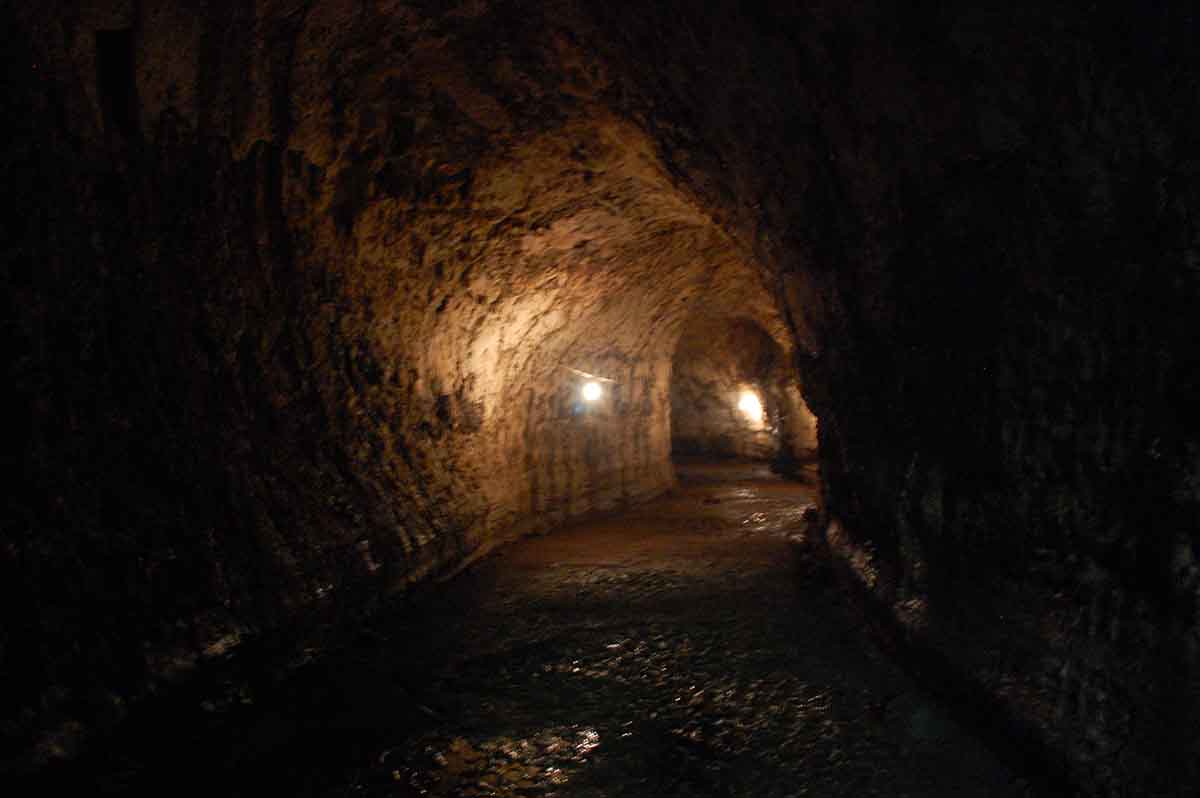 Geology: Volcanic caves from lava and pit craters in the isles of fire

Two other volcanic features commonly seen by visitors are lava tunnels and pit craters. As lava flows downslope, the top often cools and forms an insulating crust that keeps the interior lava hot and running. As the eruption subsides, the molten lava drains out of the end, living a hollow chamber that can be many kilometers in length. These tubes have smooth sides with grooves that show different levels of lava. Such lava tubes can be seen in the highlands of Santa Cruz, and there is one just outside of Puerto Ayora. Pit craters are giant sink-holes that were never eruptive. These formed when subterranean magma chambers were emptied and the roofs collapsed. Classic pit craters are found at Los Gemelos in the Santa Cruz highlands.

The Galapagos Islands are considered to be one of the most volcanic regions in the world, and in recent years there have been small eruptions at Fernandina and Marchena. In 1979 there was a major, eruption of Volcan Cerro Azul. Benjamin Morrell, captain of the Tartar, described a spectacular eruption of Fernandina in 1825.