Charles Darwin opens his chapter on the Galapagos weather and climate by saying: ‘Considering that these islands are placed directly under the equator, the climate is far from being excessively hot’. These are not tropical isles in the conventional sense, but then nothing about the Galapagos is conventional.

Very little rain falls here, except during one short season. And while the islands are not excessively hot, neither are they extremely cold. Daytime temperatures can be 30 degrees but rarely go far above that.

The unusual climate is caused by the low temperature of the surrounding water, in turn, caused by a cold polar current called the Humboldt. It is a mirror image of a warmer current in the northern Pacific that gives California its warm climate.

The wind pattern at the equator pushes surface water away at an unusual 45-degree angle, allowing cooler water to rise to the surface. These unusual patterns bathe the islands in cold water that many find too cold for swimming. 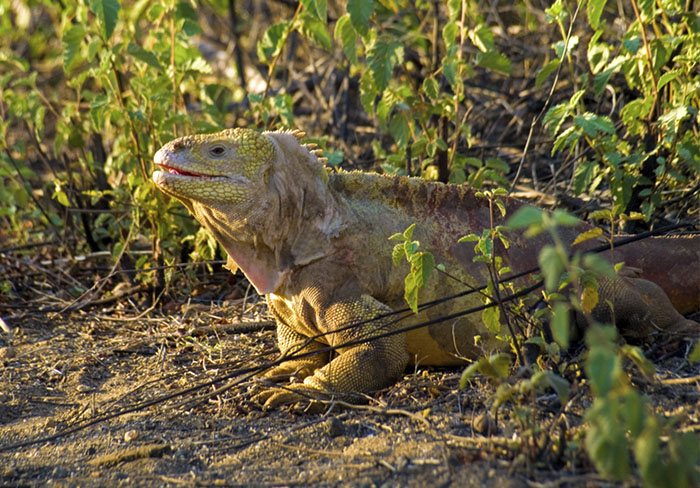 Another exceptional feature of the Galapagos Islands weather is the existence of small micro-climates and climate zones. The moister windward sides of the islands, combined with increased elevation, leads to their creation. This affects the types of vegetation that grows at certain altitudes and creates distinctly marked zones, as well as low-lying clouds.

Santa Cruz provides an excellent example of how the unusual Galapagos weather affects vegetation. Mangrove swamps give way to low-lying arid land with cacti. A transition zone forms a border between arid are as and the scalesia zone complete with Galapagos Tree fernstaller trees and leafy canopy. Above this is the shrubby miconia zone and finally the pampa zone with its moist and cold grassland.

The unique Galapagos weather lends the islands a mysterious aura and atmosphere that matches its equally unusual animal and birdlife. Nothing here is as it should be, which is why it fascinates and delights in equal measure. At Voyagers travel we can help you plan your trip at the best time of year according to your interests.

Santa Cruz provides an excellent example of the changes in Galapagos Santa Cruz Island climate and vegetation that occur with increasing elevation. Directly adjacent the coast, the dominant vegetation in the Littoral Zone is the mangroves, populated by plants that can survive in brackish or seawater. Cactus, such as the magnificant prickly pear, and Palo Santo trees dominate the Arid Zone, which on the windward side of Santa Cruz ranges up to elevations of 100 to 150 meters of so.

There is little soil development in this zone. The arid zone passes into the Transition Zone, which ranges in elevation up to 200 or 300 meters. In this zone, arid zone and scalesia zone plants mingle, along with extensive grasses and Bursera forests. Weathering of lavas is more rapid here, with some soil development. Above this is the Scalesia Zone, dominated by the weed-tree Scalesia. This is the zone of maximum fog and rain, and soils as deep as 1 meter are found. At 500 to 700 m, this zone merges into the Miconia Zone. A temperature inversion in the atmosphere at this elevation prevents moist air from rising higher, so the Miconia Zone receives less moisture that the Scalesia Zone below it.

Trees thin and are replaced by dense growth of Miconia. The abundant pyroclastic material (i.e., 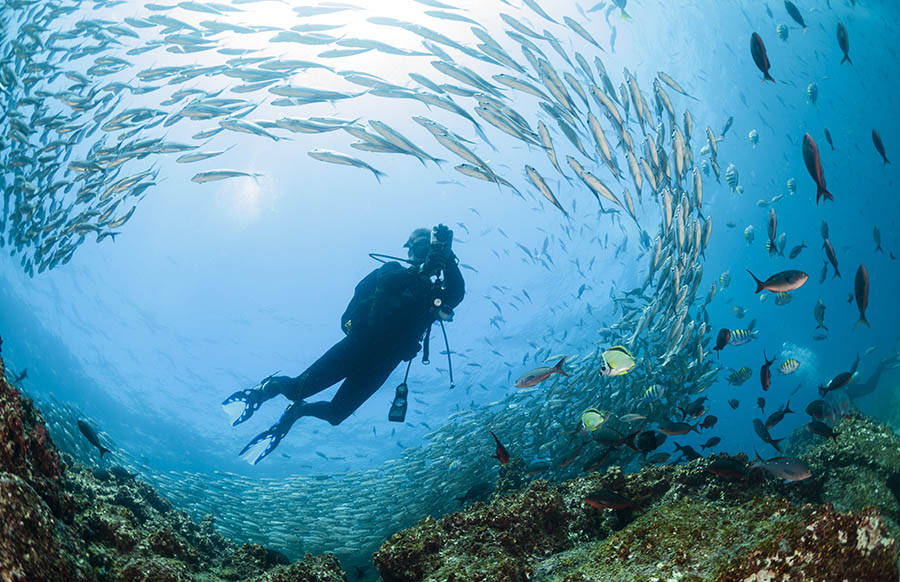 volcanic ash) at this elevation is easily weathered, so soil development is extensive. The Fern-Sedge Zone is found at the highest elevations and is generally above the clouds. Moisture is derived primarily from fog. Here the vegetation is dominated by low shrubs, ferns, tree ferns, and sedges. These elevations refer to the southern, windward side.

On the lee side, the arid and transition zones extend nearly to the summit. The fauna changes with elevation as well, though some animals, such as the tortiose, may be found through a range of climatic zones. The brilliant Vermillion Flycatcher, however, is found only in the higher elevations.

There are two seasons in the Galapagos. Garua, the Galapagos Dry season, which runs from July to December. “Garua” refers to the fog and mist that commonly hangs on the higher elevations during this season. The hot or wet season lasts from January through June, with March and April generally being the wettest months. The timing of the seasonal change varies somewhat and there are often several month transitions when either type of weather can occur.

These seasons are also governed by oceanographic conditions. Around December, several changes occur in atmospheric and oceanic currents. The trade winds slacken and the Intertropical Convergence Zone, the “climatic equator” that is usually located north of the geographic equator, shifts south toward the Galapagos. The slacking trade winds cause the westward flowing current to slow. These reduce the upwelling and allow warmer water to invade the region. The air warms and the inversion layer breaks down. This allows warm air to rise to the point where rain clouds form and daily afternoon showers occur. Even in this season, however, low elevations, particularly those in the rain shadow of highlands, receive only limited rain. Interestingly, the highlands receive more moisture from the garua than they do from the rain.

Every few years, this seasonal warming is more intense and prolonged than usual. These are oceanographic events known as El Niño, and they are coupled to a reversal in atmospheric circulation known as the Southern Oscillation. Together they are sometimes called ENSO (for El Niño-Southern Oscillation) El niño Southern oscillationevents. When an El Niño occurs, the entire equatorial and atmospheric circulation pattern reverses. Currents and winds reverse and now bring warm water and air from the western Pacific to the Galapagos and coastal South America. In association with this, the normal atmospheric high-pressure system in the eastern Pacific is replaced with a low pressure one, and the low-pressure system in the western Pacific with a high-pressure one (see the adjacent diagram).

Areas in northern Australia, New Guinea, and Indonesia suffer drought while heavy rains occur in the Galapagos and the west coast of South America. In the Galapagos, the rains moisten even the dry lowlands, allowing vegetation to flourish. With food abundant, the Galapagos Iguanaterrestrial animals, such as the iguanas and finches, do well. At the same time, these changes inhibit the upwelling that enriches the Galapagos waters in nutrients. Sea life suffers as a result, sometimes dramatically. A particularly severe El Niño occurred in 1982-1983. Terrestrial life flourished; finches, for example, raised several broods of young. But it was a catastrophe for marine life. Seabirds of all types were unable to raise their young and there was high mortality among marine iguanas and fur seals. El Niño thus sets a rhythm to Galapagos life, but one in which the fortunes of marine and terrestrial life are exactly out of phase.

The 1997-1998 El Niño has been one of the strongest events of the century. Drought and wildfires plagued Indonesia and Australia while western North and South America suffered from floods and heavy snows. It had the expected effect on the Galapagos: heavy rain fell between March and June of 1997, and again in the wet season of 1998; the sea and air temperatures were typically 4 to 5° C above normal. This has an adverse impact on marine life, since upwelling, and hence ocean nutrient levels have been reduced. On the whole, however, this El Niño seems not to have devastated marine life quite so badly as did the 1982-83 event. Nevertheless, as the El Niño drew to a close in June of 1998, one could see sea lion carcasses and bones littering Galapagos beaches. There was high mortality among marine iguanas as well, and the survivors looked emaciated. Many seabirds failed to rear young. On the other hand, the abundant rainfall made the normally arid and brown lowlands verdant and terrestrial animals and birds flourished.

A La Niña event, in which the air and water are cooler than normal, is expected for 1998-99. This will be beneficial to marine life but will take a toll on land-dwellers. The El Niño-La Niña cycle is part of the rhythm of life in the Galapagos and the fauna and flora there are well adapted to it. Though the weak succumb, the strong survive to pass on their genes to a new generation. Life goes on
. 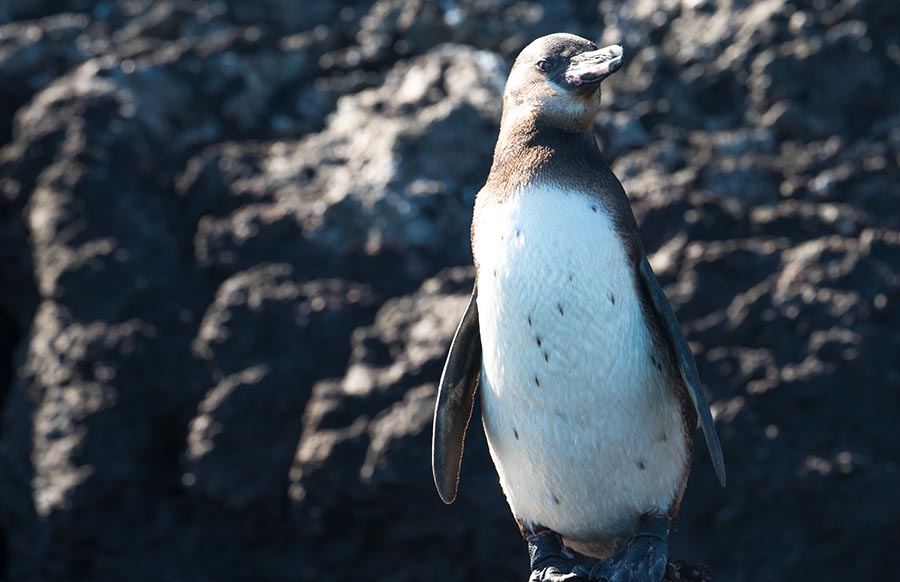 Quite mild, not excessively hot nor intensively cold.
Between 26 and 30 degrees Celsius (78 Fahrenheit).
Between 21 and 23 degrees Celsius (71 Fahrenheit).
Two: cold current Humboldt and warm current “El Niño”.
Sometimes, particularly in open waters, but less effect is felt on large vessels and small catamarans.
Depending on your tolerance to water temperatures. Your guide will tell you how sea waters are on every visited site.