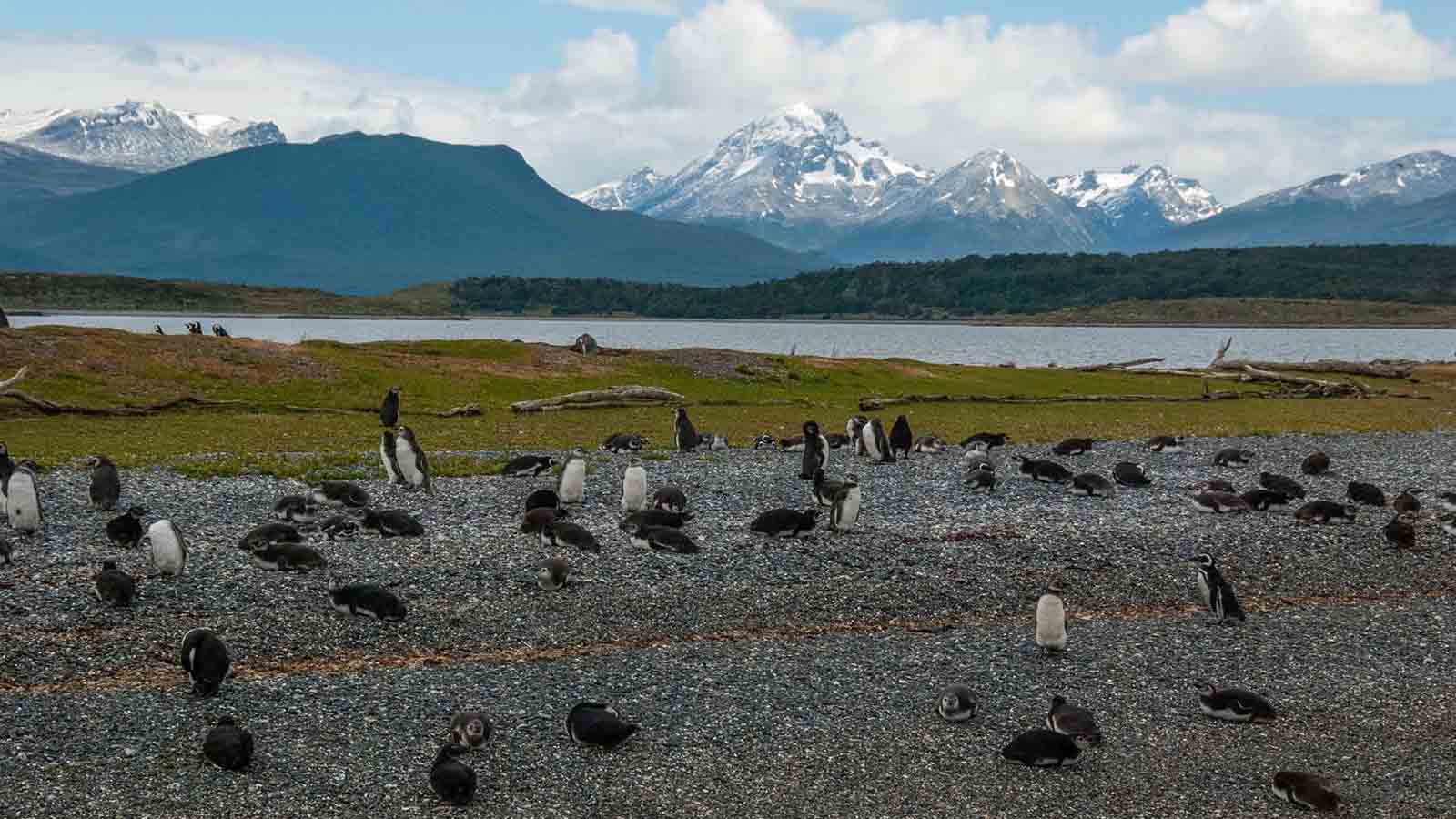 It is a narrow channel or maritime passage, being a natural communication channel of the Atlantic and Pacific oceans. It crosses the Fuegian archipelago from east to west, almost at the latitude of the 55th parallel. It stretches for 190 km, with an average width of 4 km (although at Mackinlay Pass, south of Gable Island, it reaches just 1 km). Its western half is located in the Chilean sector of Tierra del Fuego. While to the east, between the meridians 68°36 '38.5 `` W and 66°25'00'" W, is the international boundary between Argentina and Chile that runs almost through the center of the channel (to the north the Argentine sector and to the south the Chilean). The city of Ushuaia is located on the coast of the Beagle Channel.

The channel corresponds to an old valley of glacial origin that was invaded by the sea. It is flanked by mountain ranges that run parallel: on the north coast the Cordillera Fueguina (Argentina) and the Cordillera Darwin (Chile), both on the Isla Grande de Tierra del Fuego, on the south coast there is a succession of Chilean islands between which Navarino and Hoste stand out. On the islands and islets bordering Ushuaia, which are called the Bridges Islands, and in the eastern part of the channel, there is the greatest diversity of marine birds and mammals that invite you to watch them (colonies of sea lions, cormorants, petrels, skuas, albatross, etc).

Voyagers travel has several tours that visit Ushuaia and include navigations along the Beagle channel and it’s wildlife rich islands where you can spot penguins, sea lions and other wildlife, here are a few sample programs:

8 day End of the world tour including Ushuaia and the Beagle Channel: https://www.voyagers.travel/patagonia/tours/the-end-of-the-world-tour

12 day Patagonia and End of the World tour: https://www.voyagers.travel/patagonia/tours/peninsula-valdes-tour

By sea: tourist cruises – for example the Mare Australis - and private boats of different sizes arrive in the city of Ushuaia, coming from the Atlantic and Pacific Oceans (Chile), bound for Antarctica and Chile. *By air: you arrive at the Malvinas Argentinas International Airport (Ushuaia Peninsula) and the Ushuaia Aeroclub (Ushuaia Bay), bathed by the waters of the Beagle Channel. The coast of the canal is also accessible by land: by any means of transport and through guided excursions.

Different types of boats depart daily from the Port of Ushuaia, visiting the colonies of wild marine fauna. Throughout the year you can do the classic circuit that reaches the Isla de Los Pajaros and the Isla de Los Lobos, continuing to the Les Eclaireurs Lighthouse, a symbol of the "end of the world". Some companies offer walks on Bridges Islands or “H” Island. In all cases, the navigation is carried out in the company of guides who inform about the history, geography, flora, and fauna of the place. FROM THE END OF OCTOBER TO APRIL approximately, the option known as "Pingüinera" is added to the classic circuit, the route extends 90 km. south to Isla Martillo, where an important colony of Magellanic penguins nests, with some specimens of Vincha or Papua penguins. During the tour, you sail along the east coast of the Canal, so you can see its small bays and natural ports. Regular departures are also offered in which passengers are transferred by land, from Ushuaia to Estancia Harberton (located 85 km away).

From there, embark on semi-rigid boats to Martillo Island and take a walk through trails that allow you to appreciate the penguins from up close. Another option is the most extensive navigation that combines the classic walk, the penguin colony, and reaches Estancia Harberton (the return is by land). . On the other hand, longer sea voyages are organized that include sailing to different islands, some reaching Isla de Los Estados or Cape Horn (Chile). 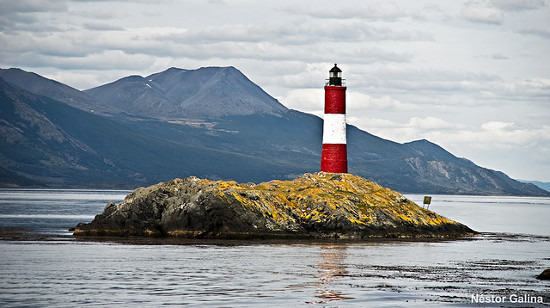 ANTARCTICA: Ushuaia is the undisputed gateway to the Antarctic Peninsula cruises, given that it is only 1,200 km away. Various vessels, of the icebreaker type or with reinforced hulls, leave for the white continent and depending on the choice of cruise, you can enjoy a luxury or expedition-adventure trip. The minimum duration of these trips is 9 days since the crossing of the Drake Passage takes at least two days. When the tour includes Cape Horn, the Shetlands, Georgia, or Falkland Islands. The trip can exceed two weeks. It is also possible to carry out the semi-circumnavigation of the Antarctic continent, whose duration is 3 to 4 weeks.

One of the most interesting attractions of the Beagle Channel is located on the east coast of the city of Ushuaia, in front of the historic Estancia Harberton. During the spring and summer, Isla Martillo becomes the refuge of a unique colony of penguins in the country: various species converge on this islet to nest and care for their young. The most numerous species is that of the Magellanic penguins. Occasionally, King penguins and Gentoo penguins can be seen.

The soil on Martillo Island is soft and contains abundant organic matter, which allows the penguins to dig comfortable nests and caves. Pairs begin to arrive in the spring to occupy their nests and prepare for incubation, which lasts 40-50 days depending on the species. Once the chicks hatch, the parents must take care of feeding them and defending them from predators.

Excursions to this colony can be made by boat or by land, departing from Ushuaia. As it is a protected nature reserve, visits are made in small groups, accompanied by professional guides. The opportunity to see this iconic species of the southern austral up close is one of the most memorable experiences offered by the end of the world. 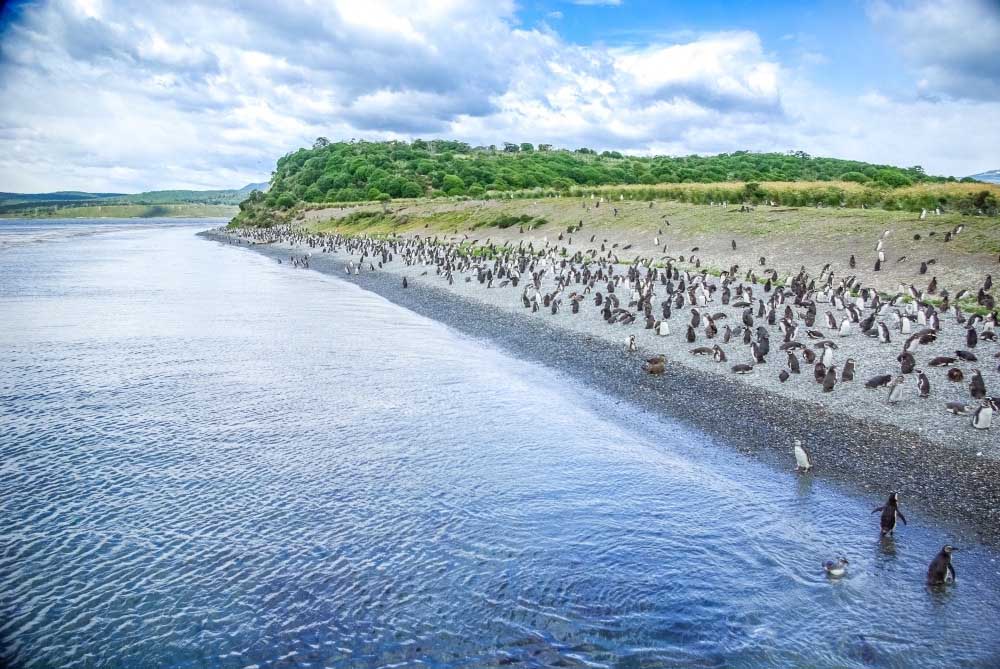 It is the oldest Estancia in Tierra del Fuego, located to the east and 90km from our city. It has a high historical value, since its owners are the descendants of the Anglican missionary Thomas Bridges, who at the beginning of this century lived with the aborigines of the area. Starting from Ushuaia, heading north along National Route No. 3, we cross the area of ​​the valleys until joining the complementary route "J". You begin to cross a valley, to the east, where the route narrows, presenting innumerable curves and large slopes. Along it we will observe peat bogs, rivers and lagoons surrounded by beautiful vegetation and populated sporadically by flag trees. We arrive at Estancia Harberton where we make a visit to the property that surrounds it where we will be informed of its past and current activity. Once there, we can visit the Acatushún Museum, where skeletons of birds and marine mammals from southern South America are exhibited. After this visit, we can taste a delicious tea with pastries made at the Estancia and then start the return to the city. 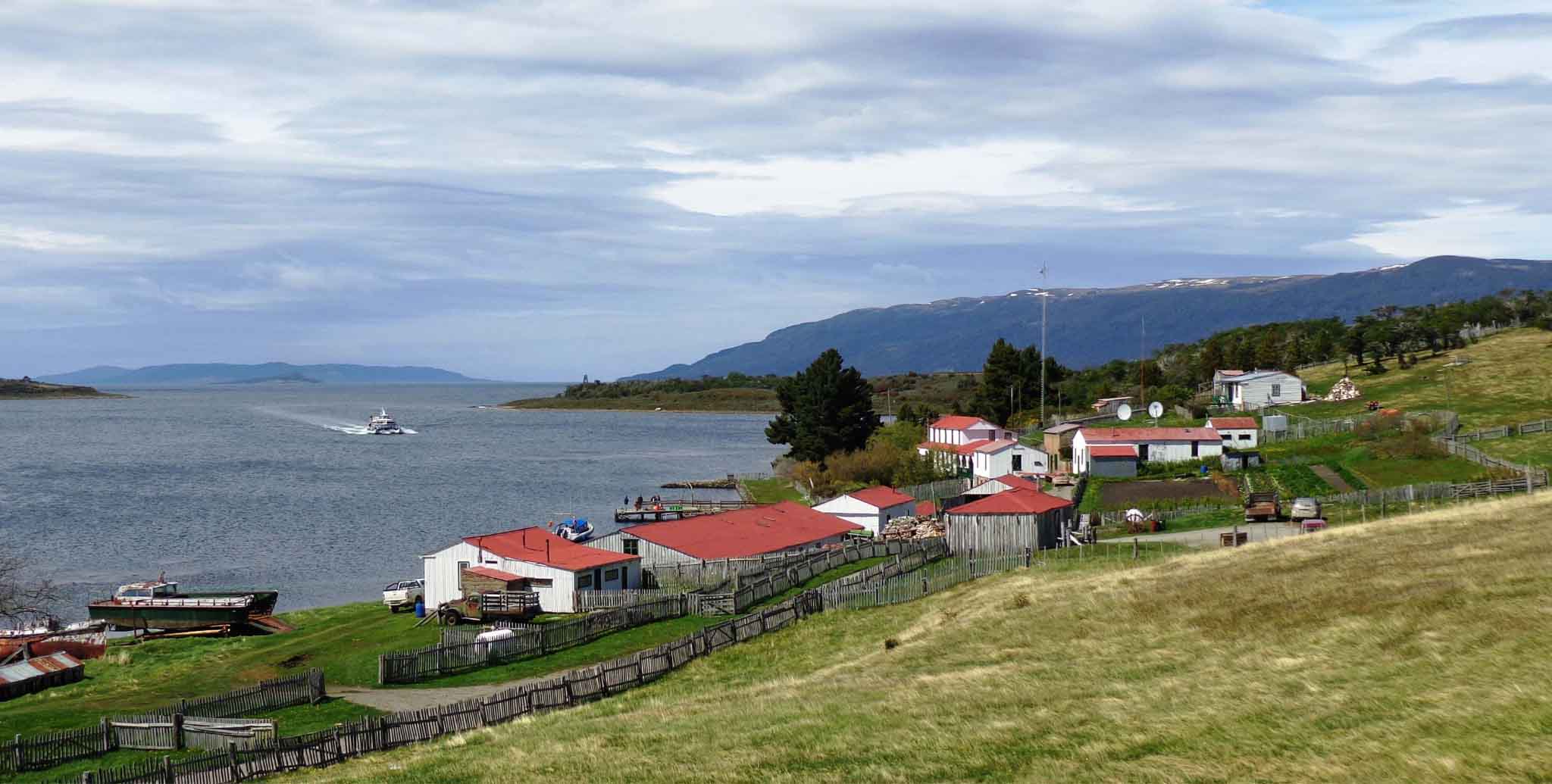 Navigation island of wolves and birds

Starting from the tourist port, we will sail along the Bay of Ushuaia and the Beagle Channel, where we will have a beautiful view of the city of Ushuaia with its unique combination of mountains, forests, and sea. We will observe the Montes Olivia and Cinco Hermanos, the Estancias Fique and Túnel. The boat borders the Isla de Los Pájaros where it is possible to spot the flora and fauna of the place and particularly stand out skuas, black-browed albatrosses, steamer ducks, cauquenes, cook gulls, and gray gulls. We will continue sailing to the Les Eclaireurs Lighthouse where there is a small colony of imperial and rock cormorants. Sailing back, we approach Isla de Los Lobos to enjoy this attractive marine mammal, and Despard Island, the natural habitat of imperial cormorants. Navigating between the Bridges archipelago and through the Paso Chico, we return to the city of Ushuaia. The Les Eclaireurs lighthouse indicates to navigators the entrance to Ushuaia Bay. It receives the same name as the group of islets on which it is located, which was baptized in 1883 by the frigate captain Louis Martial, in command of the French expedition La Romanche. It is at this point where the return to the city's tourist dock is undertaken, in the company of skuas, petrels, albatrosses, and seagulls, among other species of marine birds that generally escort the return. 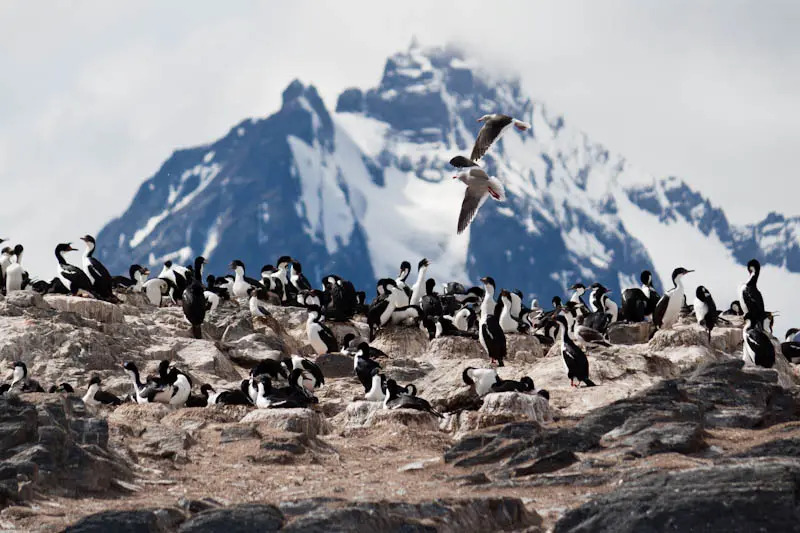 Last posts
A detailed guide to visiting the Perito Moreno Glacier
72 hours in El Calafate
10 Things to Do in El Chalten
15 Things to do in Cuenca (Ecuador)
Discover Cotopaxi - a complete guide to the National Park
Guayaquil - is it worth visiting?
Hiking El Circuito Chico near Bariloche
Detailed visitor guide of the Punta Espinoza trail on Fernandina Island
A travelers guide to Mindo - not only birds and butterflies!
Hiking Guide to Cerro Llao Llao, Bariloche
Tags
PatagoniaNature Encounters
What is your next adventure?
Ecuador
Galapagos
Peru
Patagonia
Antarctica